Coal serves as the primary energy source for much of the United States, contributing 39 percent of total energy generated in 2013 (EIA – U.S. Electricity Generation 2015). Indiana is an extreme case, with 85 percent of its electricity consumption coming from coal (EIA – U.S. Electricity Generation 2015). It is because of this dominance that the SustainIN team decided to study coal before other energy sources, as it is likely that impacts on sustainability from coal are greater than those of other energy sources.

Impacts to human health and the environment from the extraction and use of coal are wide-ranging and well documented. These impacts generally have a negative effect on a state’s sustainability. Because of the intensive use of coal as an energy source, these impacts are often congruent with the major environmental issues facing the state at a given time. Our team has utilized several indicators to evaluate these impacts and ascertain the significance of coal in generating negative environmental effects in Indiana and nine other states. These indicators can be categorized according to source, generation, and energy profile of the state.

In the source indicator, nine metrics were analyzed to better understand the impacts of coal mining on the sustainability of each state. These metrics are as follows:

Data for this indicator were obtained through sources such as the Office of Surface Mining, Reclamation, and Enforcement’s Annual Reports; The Environmental Protection Agency’s Coal Data Browser; the Mine Safety and Health Administration’s Annual reports, and other sources. When scoring is concerned, each state was ranked for each of the nine metrics from one to ten based on reasoning described in the full report. An example ranking of Transport Method may be seen below. 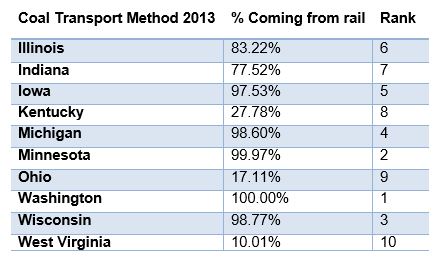 Each metric was ranked at the most recent year that data was available for all ten states being compared. 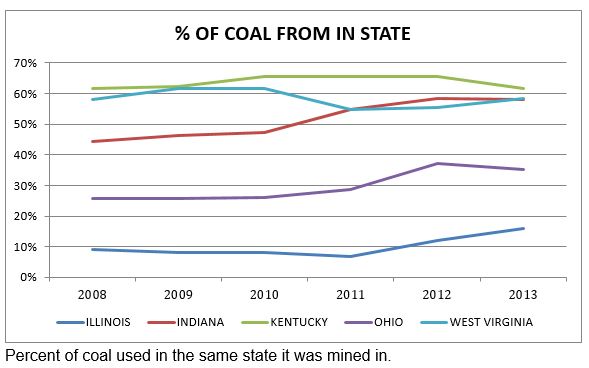 Findings in this Metric