A pesticide is “any substance or mixture of substances intended for preventing, destroying, repelling, or mitigating any pest” (EPA 2014a). Classes of pesticides and their targeted pests include, but are not limited to, herbicides (weeds), insecticides (insects), fungicides (fungi), nematocides (nematodes), rodenticides (vertebrate poisons), acaricides (mites), piscicide (fish) (FAO 1995; Singh 2012). Pesticides can runoff into nearby streams or infiltrate the soil to reach the groundwater. The most ecologically harmful pesticides (that bioaccumulate, drift to non-target organisms, or have long residence times) tend to be water insoluble, have low adsorption capabilities, long half-lives, and high volatility (Fishel 2008). However, each pesticide behaves differently in different environmental and geographic conditions. The relationship between pesticides and environmental sustainability has been alluded to extensively—pesticides can present serious threats to aquatic life, lead to imbalances in entire ecosystems (e.g. Rachel Carson’s Silent Spring), and can cause systemic damage to the human body, especially when improperly or excessively applied.

Metric 1: Intensity of Use (kg. applied per non-organic acre of farmland).

Sources and assumptions: The intensity metric is compiled from the U.S. Department of Agriculture’s National Agricultural Statistics Service’s cropland database and data from EPA and state government resources.  The assumption is that this data is up to date and accurate and that it adequately portrays a state’s pesticide use practices. 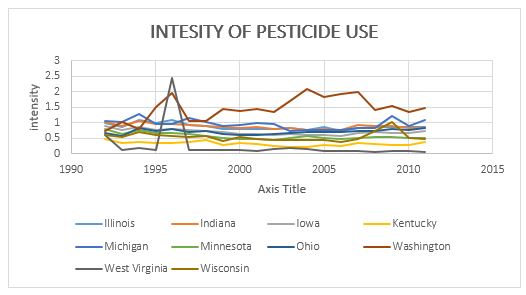 Indiana ranked 6th out of 10 states in the intensity of pesticide use which is reasonable considering Indiana is an agricultural state, but could be doing a lot more to reduce its reliance on conventional pesticide use.

Pursuant to section 303(d) of the Clean Water Act, states must submit comprehensive water quality assessments to the EPA every two years delineating impaired waters based on various categories of potential use. States also list, in varying degrees of detail, the source pollutant(s) for each impaired water. An efficient measurement of a state’s sustainability in terms of its pesticide use is the percentage of impaired waters with pesticides as the main source pollutant.

Rather than basing the metric on the total miles and total miles squared of pesticide impaired, we based it on the amount of pesticide impaired waters as a percentage of a state’s total impaired waters–in this way the metric avoids unfair bias towards states with more or fewer miles of water than others.  Accounting for that, West Virginia and Kentucky rank 1st and 2nd (West Virginia ranks first based on the larger denominator of potentially impaired waters). This makes sense as both Kentucky and West Virginia are mining states, rather than farming. Indiana ranks 3rd as they report only one pesticide contaminated water body since 2008.  While only 0.05 percent of Michigan’s rivers and streams (miles) are pesticide-impaired, Michigan ranks 10th by a large margin due to the 34,392.1 miles squared of Great Lakes contaminated with chlordane. Illinois also encounters this same problem as it shares borders with Great Lakes.