Buffer Zone Metric
Buffer zones are areas that border water bodies and separate the water from, in this context, an agricultural operation. Buffer zones are constructed using permanent vegetation. These can include grasses, shrubs, trees, and other forms of vegetation (NRCS 1999). The width of buffer zones varies and as they become wider, the ability to capture nutrients and other chemicals increases (Vought 1995).The width of buffer zones can range significantly and have the capability of capturing in excess of 50 percent of pesticides and nutrients, 60 percent of pathogens, and 75 percent of sediment (NRCS 1999).  The State Sustainability Index includes buffer zone metrics due to their importance in agricultural operations and the impact that they have on both water quality and quantity. The metric provides states with information on several factors:
Methodology Example – Indiana Streams
The four maps below demonstrate the method for determining the status and quality of buffers in the state of Indiana; identical processes were used for the other 9 considered states.The map below is a selected region of Indiana whose primary land use type is comprised of corn and soybeans. The streams in this region are represented by blue lines. The primary land use types are: 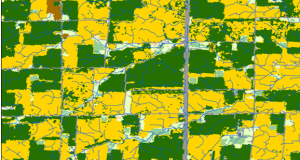 The map below shoes the same region as the previous map with 50 meter buffers represented by the red lines: 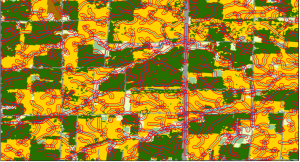 The map below shows the types of land use that are within the 50 meter buffers shown in the previous map. The primary land use types located within the buffer are: 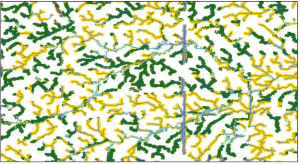 As discussed previously, buffers should be comprised of non-agricultural land, such as forested land, which is represented in this region. However, the majority of the land use type within the 50 meter buffer in this region is either corn or soybeans. This means that the streams in the region will be, holding all other factors constant, more susceptible to agricultural fertilizer runoff pollution than streams that do not have cropland within 50 meters, but instead have buffers that are comprised of either forested land or grassland.

The map below is similar to the previous map and shows the types of land use that are within the 50 meter buffers for all streams in the state of Indiana. The primary land use types located within the buffer are: 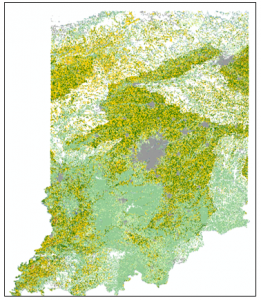 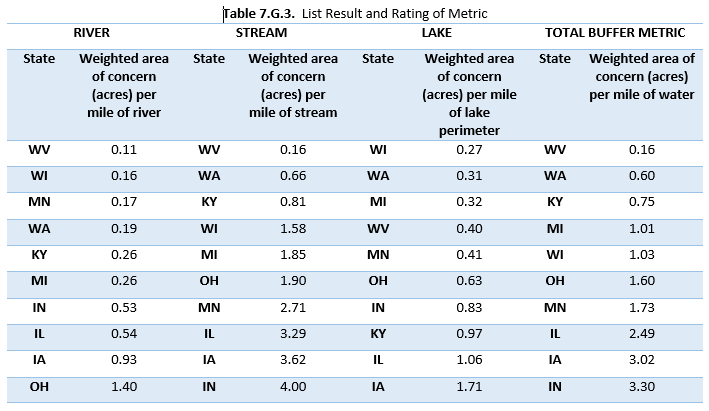 The table below displays the same results that are displayed in the previous table, but the weighted area of concern (in acres of cropland) is now normalized by the amount of cropland within the state. Therefore, the metric displays the percent of total (weighted) cropland within the buffers of a water body per mile of that type of water body. Due to the fact that the value is in units of percent of total cropland per mile of water body, the value is a small number. However, this does not indicate a small impact on water bodies. This metric can give insights into what kind of policies a state should adopt with regard to buffers. For example, West Virginia does not have a large amount of cropland near its water bodies, which can be seen in the table above, but a larger percentage of the cropland that West Virginia does have is within the buffer distances that were considered for this analysis as compared to the other 9 states that were analyzed. 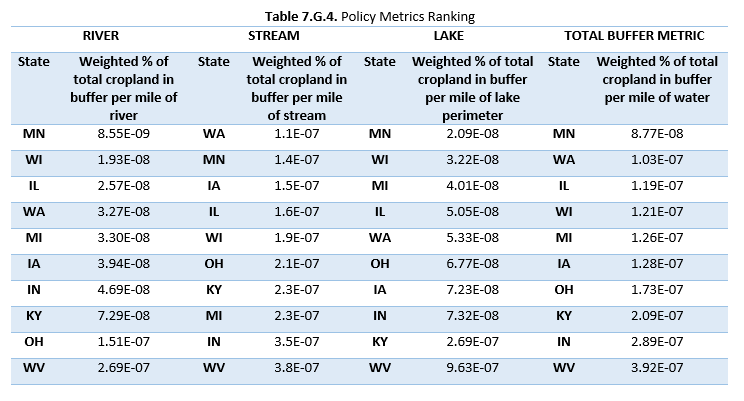 The buffer policy metric ranking above is useful for comparing states while accounting for the difference in the amount of cropland in each state. Additionally, the buffer policy metric ranking is useful for determining which states have buffer-related statutes and regulations that are effective in minimizing the amount of cropland that is near water bodies.